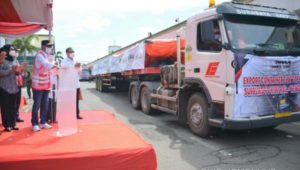 Minister of Transportation witnesses the release of the first stage of exports of 262 carriages of goods produced by INKA to New Zealand, Friday (12/31), in Madiun, East Java province. (Photo by: PR of Ministry of Transportation)

Minister of Transportation Budi Karya Sumadi visited the PT INKA office in Madiun, East Java province, Friday (12/31) to witness the symbolic release of the first phase of the export.

Budi expressed his pride over the achievement made by PT INKA for creating products that are able to compete in the international market.

“We must be proud that our domestic company is able to export products with high economic value,” he said.

Budi went on to say that PT INKA not only made train carriages, but also built electric buses which would later be prepared for the G20 Summit in Bali as well as containers for sea toll ships in Eastern Indonesia.

“All of these are productive goods that provide investment support which can boost economic growth,” he added.

The Minister also called on PT INKA to continue to maintain quality and price in a bid to spur the competitiveness of its products abroad.

On that occasion, President Director of PT INKA Budi Noviantoro said that a New Zealand’s state-owned company KiwiRail has made the order for freight carriages from PT INKA. The company operates rail transportation and is also the largest inter-island ferry operator in the country.

“There are still several cooperation packages that we will strive for. Hopefully, PT INKA will get the next project,” Budi said.

This export is expected to be a big step for Indonesia, especially PT INKA, to take up another role in the railway market in the Oceania region. Previously, PT INKA had also exported 224 blizzard center sills for BradkenRail of Australia. (PR of Ministry of Transportation/UN) (EST/MUR)