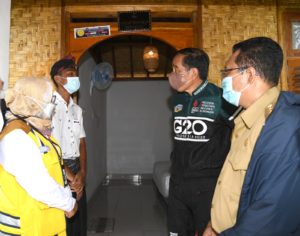 “Today, I’m in West Nusa Tenggara province to ensure the readiness of infrastructure ahead of Mandalika MotoGP in March,” the President said.

The President also expressed hope that the Mandalika MotoGP can boost economic growth of the people in the region.

To that end, the Central Government and the regional governments, he added, have offered support for the local residents in building 300 homestays.

According to the President, once all homestays are fully occupied when the MotoGP takes place, they will bring significant effect to the economy of the residents of Mandalika Special Economic Zone.

During the working visit, the President also inspected Zainuddin Abdul Madjid International Airport, which will serve as a hub to the province for participants and guests of Mandalika MotoGP 2022.

The President added that procedures during the arrival at the airport have met the requirements, including by presenting a negative result of PCR test and proof of being fully vaccinated.

“I hope visitors travelling from airport to Mandalika through this bypass can enjoy this beautiful landscape. Therefore, we must prepare the infrastructure. I order it be finished in February,” he remarked. (TGH/UN) (RAS/EP)