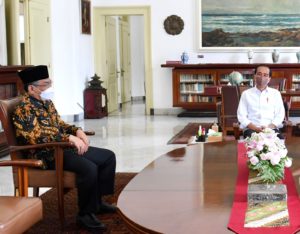 The Chairperson-elect of Indonesia’s largest grassroots Muslim organization, Nahdlatul Ulama (NU), came to report the results of the organization’s 34th National Congress (Muktamar) that was held on December 22-24, 2021 in Lampung province.

“I reported the results of the 34th Muktamar of Nahdlatul Ulama, of whom I was elected as the Chairperson of PBNU for the period of 2021-2026, while K.H. Miftachul Achyar was declared as the Rais Aam (Supreme Leader). I also reported the results agreed during the Muktamar regarding programs, agendas that will certainly be closely related to prospects of cooperation, including with the Government,” Yahya said in a press statement after the meeting.

According to Gus Yahya, as he is better known as, the Government and Nahdlatul Ulama share the same responsibility to foster, maintain, and build Indonesia.

“Nahdlatul Ulama and the Government must continue to cooperate closely to carry out the responsibility, he added while expressing hope that he can improve the organization’s consolidation in order to turn Nahdlatul Ulama into an agent of transformation.

“When we have national agendas to mobilize the wide community, Nahdlatul Ulama must be able to be truly effective in playing its role in community participation, including to help make the Government’s agenda a success,” he remarked. (BPMI of Presidential Secretariat/UN) (DH/MUR)