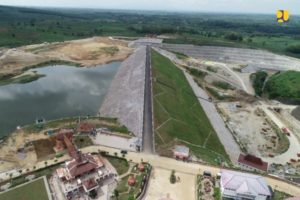 Source: PR of Ministry of Public Works and Public Housing

The physical construction of Randugunting Dam in Blora regency, Central Java province has been completed ahead of schedule.

Minister of Public Works and Public Housing Basuki Hadimuljono expressed hope that the dam with a capacity of 14.43 million cubic meters can be inaugurated at the beginning of this month.

“The dam was finished 10 months earlier than [planned] in the contract in 2022. Overall, the dam [construction] has been completed. We only have to tidy up the building and landscape. I hope it can be inaugurated by the President at the beginning of January 2022,” the Minister said, quoted from the official website of Ministry of Public Works and Public Housing, Tuesday (01/04).

For the record, the dam was constructed from 2018 to 2022 with a contract value of Rp880 billion financed by the State Budget. The process went well without any technical issues with construction or social issues with land acquisition.

Basuki also pointed out that Randugunting Dam has been planned to increase water supplies for dry areas in Blora and Rembang regencies since the 1990s.

“We are aware that Blora and Rembang are vulnerable to shortage of water. This dam will be able to provide raw water supply [with a flow rate of] 200 liters/second and irrigate 670 hectares [of land]. It can also be used as a tourist destination,” he said.

In addition to being a source of raw water and irrigation, the dam with an inundation area of 187.19 hectares also serves to reduce flood by 75 percent or 81 cubic meters per second, reducing flood-affected area from 4,604 hectares to 2,285 hectares.

Randugunting Dam also has a potential to become a solar power plant with a solar panel system.

“This dam has a potential for solar energy, so we will try to install floating solar panel on the dam. To date, we have 231 dams. If added with 61 dams that will be finished constructed in 2024, we will have 292 dams. If we install floating solar panels on all dams, renewable energy can be developed [from dams],” he remarked. (PR of Ministry of Public Works and Public Housing/UN) (DH/MMB)

Help us improve information service by filling out a survey on this link. Thank you!

The official website of Ministry of Public Works and Public Housing can be accessed through this link.